The Domputer, as it’s been called, was the great idea of mathematician, teacher, and entertainer Matt Parker (see a previous post about Matt here), and he and many volunteers built it at the Manchester Science Festival at the end of October. 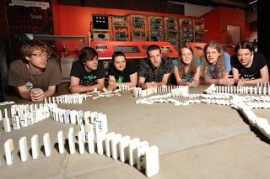 Matt and some of his teammates testing domino circuits.

So, what is a domino computer, and how does it work?  As Matt is quoted saying in a podcast that featured the project, “A domino computer is exactly that: a computer made out of chains of dominoes.  Flicking over one domino sends a signal racing along the chain, just like current flows down a wire.  And then interacting lines of dominoes can manipulate the signal exactly the way circuit components do.”

At its very, very basic level, a computer is a machine that does calculations in binary.  You input some sequence of 0s and 1s by flipping signals on and off, and your input starts a chain of electrical communications that results in an output of 0s and 1s.  Most computers do this with electrical circuits.  But it can also be done with dominoes – sending an “on” signal means flipping a domino over, and sending an “off” signal means not flipping a domino, or having a chain of falling dominoes that becomes blocked and stops falling.

There are lots of different kinds of commands that you can send by flipping switches on and off and making those signals interact.  For example, suppose you want something to happen only if two switches are on – if the first switch is on AND the second switch is on.  For this you would need to make something called an “AND gate” – an interaction in chains of current that will continue the chain if both switches are on and will stop the chain if either (or both) is off.  How would you do that with dominoes?  In this video, Matt demonstrates how to make an AND gate out of dominoes: Domino AND gate.  Check out this video for OR (the chain continues if one or the other or both are on) and XOR (“exclusive or,” the chain continues if one or the other, but not both, are on) gates:

Matt’s Domputer does something very simple: it adds numbers in binary.  But, as you might imagine, it was extremely complicated to build!  According to the Manchester Science Festival Twitter feed, the Domputer used about 10,000 dominoes and would take about 13,600 years to do what a normal processor could do in a second.  Wow!

Here it is in action.  It messed up on this calculation (9+3), but succeeded in later attempts – and is fascinating to watch nonetheless!

Next up, we’ve written about mathematical knitting before (remember Wooly Thoughts and the prime factorization sweater?), but here’s a great site I recently found made by mathematician, knitter, and dancer Sarah-Marie Belcastro. 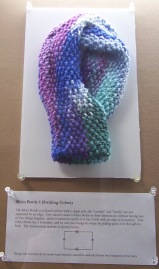 This site is full of articles and about and patterns for all kinds of cool mathematical objects – like Klein bottles (which make great hats, by the way)!  In her post about knitted Klein bottles (and all of the other objects she makes), Sarah-Marie not only describes how to knit the objects but a lot of mathematics about them.  I don’t know about you, but I always find mathematical ideas easier to understand when I can make models of them, or at least read about models being made.  Sarah-Marie does a great job of blending mathematical descriptions with how-to-make-it recipes.

Some other patterns that I love are Sarah-Marie’s 8-colored two-hole torus pants and this knitted trefoil knot.