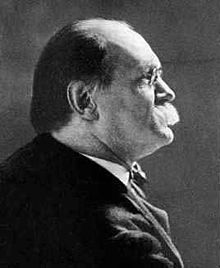 First up, remember Sam Loyd?  (We’ve featured him twice before.)   He was an american chess player and recreational mathematician who lived from 1841-1911.  He was also a chess composer, someone who writes endgame strategies and chess puzzles.  In fact, he wrote all sorts of puzzles, which his son published in a book called Sam Loyd’s Cyclopedia of 5000 Puzzles, Tricks, and Conundrums.  (That link will take you to a scan of all 385 pages!)  By the way, those 5000 puzzles are only about half of the ones he wrote in his lifetime.  It’s no wonder Martin Gardner called him “America’s greatest puzzler.”  An interesting anecdote: Sam Loyd claimed until his death to have invented the 15 puzzle, but in fact he did not.  The actual inventor was Noyes Chapman, the Postmaster of Canastota, NY.

I wanted to show you some of Sam’s “Puzzling Scales” problems.  Why don’t you stop reading now and just solve them both?

These different weights balance because of the torque they apply

There are lots of puzzles like this, based on different weights balancing with each other.  A friend sent me this page of weight puzzles based on the idea of torque.  The farther out an object is placed, the more torque it applies to the balance, so it’s possible for a 1 pound weight to balance a 2 pound weight if you set them at the right distances.  The distance and wight multiply to give the torque applied.

These problems come from a massive bank of puzzles over on Erich’s Puzzle Palace.  If you like, you can also play this torque game I found.

I love problems like this, but I started to wonder, “what if the scales don’t balance?  Maybe you could make a puzzle out of that.”  I did exactly that, creating a series of imbalance puzzles.  Your job is to order the shapes by weight.  They start out easy, but there are some tricky ones.  I especially like #6.

In each case, order the three objects by weight.

I’m also hosting an imbalance puzzle-writing contest.  My two favorite puzzlists will win a print of their choosing from my Stars of the Mind’s Sky series of mathematical art.  You should try your hand at writing one.  Just email it to Lost in Recursion.

Finally – we all love great problems and puzzles, but skill building is an important aspect of mathematics as well, and exercises help us build skill.  Exercises are often dull, but I found a website with some exercises I quite like, and I wanted to share them with you.  Check out the Coffee Break section over on StudyMaths.co.uk.

Detention Dash, for example, is just a timed multiplication chart, but typing the answers in on my computer really made me feel some of the patterns in the numbers.  You should try it.  Odd One Out also keeps you on your toes and makes you think about different kinds of numbers.  I find them surprisingly fun.  I hope you agree.