This week brought some sad news to the mathematical world. Alexander Grothendieck, known by many as the greatest mathematician of the past century, passed away on November 13th. You may not have heard of him, but many mathematicians say that the work he did in math was as influential as the work Albert Einstein did in physics.

One of the things that make Grothendieck so interesting is, of course, the math he did. Grothendieck was always very creative. When he was in high school, he preferred to do math problems he made up on his own over the problems assigned by his teacher. “These were the book’s problems, and not my problems,” he said.

When he was young, inspired by some gaps he found in definitions in his geometry book about measuring lengths and areas, Grothendieck re-created some of the most important mathematical ideas of the beginning of the twentieth century. Maybe this sounds silly to you– why re-invent something that’s already been done? But, to Grothendieck, the most important part was that he’d done the whole thing by himself. He’d figured out something in his own way. He later wrote that this experience showed him what being a mathematician was like:

Without having been told, I nevertheless knew ‘in
my gut’ that I was a mathematician: someone who
‘does’ math, in the fullest sense of the word…

During his years as a mathematician, Grothendieck worked on connecting different parts of math (a project requiring a lot of creativity)– algebra, geometry, topology, and calculus, among others.

Alexander Grothendieck as a kid

The other thing that makes Grothendieck so interesting is his life story. As a kid, Grothendieck and his parents fled from Germany to France to escape the Nazis. As an adult, Grothendieck spoke out strongly for peace. He used his fame to take a stand against the wars of the second half of the twentieth century. This eventually led him to step away from the world of mathematicians– which many regretted. But he left behind work that changed all of mathematics for the better.

If you’d like to learn more about Grothendieck’s fascinating life and work, check out this great (but long) article from the American Mathematical Society. This article provides a shorter history, including a great statement Grothendieck made about his feelings on creativity in mathematics. Grothendieck was a very private person, so many of his mathematical writings aren’t available online– but the Grothendieck Circle has done their best to collect everything written about him.

Next up, a little something for you to play with! We were studying circle packing problems in one of my classes this week. Did you know that you can fit exactly six circles snugly around another circle of the same size? But, if you try to fit circles snugly around a circle twice as large, it doesn’t work? I wonder why that is… 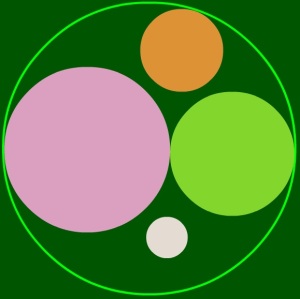 Anyway, my class inspired me to look for a circle packing game– and I found one! In this game, simply called Circle Packing, you have to fit all of the smaller circles into the larger circle– without any of them touching! It’s pretty tricky, and really fun.

Finally, the Math Munch team got something wonderful in the mail (email, I guess) this week! Math art made by Julia Dweck’s 5th grade math class! Julia’s class has been working hard to make parabolic curve string art– curves made by drawing (or stringing, in this case) many, many straight lines. They plotted each curve precisely before stringing it, to make sure it was both mathematically and artistically perfect. The pieces they made are so creative and beautiful. We’re proud to feature them on our site!

You can see the whole collection of string art pieces made by Julia’s class on our Readers’ Gallery String Art page. And, want to know more about how the 5th graders made their String Art? Have any questions for Julia and her students about their love of math and the connections they see between math and art? Write your questions here and we’ll send them to Julia’s students!

Have any math art of your own? Send it to mathmunchteam@gmail.com, and we’ll post it in the Readers’ Gallery!