Squares and circles are pretty different. Squares are boxy and have their feet firmly on the ground. Circles are round and like to roll all over the place.

Since they’re so different, people have long tried to bridge the gap between squares and circles. There’s an ancient problem called “squaring the circle” that went unsolved for thousands of years. In the 1800s, the gap between squares and circles was explored by Gabriel Lamé. Gabriel invented a family of curves that both squares and circles belong to. In the 20th century, Danish designer Piet Hein gave Lamé’s family of curves the name superellipses and used them to lay out parts of cities. One particular superellipse that’s right in the middle is called a squircle. Squircles have been used to design everything from dinner plates to touchpad buttons.

Piet had the following to say about the gap between squares and circles:

Things made with straight lines fit well together and save space. And we can move easily — physically or mentally — around things made with round lines. But we are in a straitjacket, having to accept one or the other, when often some intermediate form would be better. … The super-ellipse solved the problem. It is neither round nor rectangular, but in between. Yet it is fixed, it is definite — it has a unity.

There’s another kind of squircular object that I ran across recently. It’s a sculpture called “Squaring the Circle”, and it was created by a trio of artists known as Troika. Check out the images on this page, and then watch a video of the incredible transformation. You can find more examples of room-sized perspective-changing objects in this article.

Next up: it’s been a snowy week here on the east coast, so I thought I’d share some ideas for a great indoor activity—coloring! 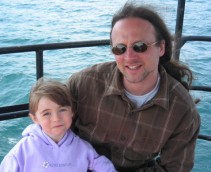 Marshall Hampton is a math professor at University of Minnesota, Duluth. Marshall studies n-body problems—a kind of physics problem that goes all the way back to Isaac Newton and that led to the discovery of chaos. He also uses math to study the genes that cause mammals to hibernate. Marshall made a coloring book full of all kinds of lovely mathematical images for his daughter Violet. He’s also shared it with the world, in both pdf and book form. Check it out!

Inspired by Mashrall’s coloring book, Alex Raichev made one of his own, called Contours. It features contour plots that you can color. Contour plots are what you get when you make outlines of areas that share the same value for a given function. Versions of contour plots often appear on weather maps, where the functions are temperature, atmospheric pressure, or precipitation levels.

Contour plots are useful. Alex shows that they can be beautiful, too!

And there are even more mathematical patterns to explore in the coloring sheets at Patterns for Colouring.

Last up, that’s not a typo in this week’s post title. I really do want to share some snowfakes with you—some artificial snowflake models created with math by Janko Gravner and David Griffeath. You can find out more by reading this paper they authored, or just skim it for the lovely images, some of which I’ve shared below.

I ran across these snowfakes at the Mathematical Imagery page of the American Mathematical Society. There are lots more great math images to explore there.