re: Solitons, Contours, and Thinking Sdrawkcab.

Violet: When you were first encountering and getting into math, how did you know that it was right for you?

NJ: I remember loving counting games. But I didn’t know that was math. My math teachers at high school gave us math games to play that involved the whole class, which I also loved. But I was lazy and didn’t keep up with the chapter-by-chapter exercises we had to do in class.

Instead I daydreamed about science fiction, like how time travel might work and how to travel to other galaxies. These dreams made me think I should be a scientist and more particularly an astrophysicist. So when I went to University, I thought I would become a physicist. I quickly found out that this was entirely wrong for me. I had no physical intuition whatsoever and I had to guess answers, which always turned out to be wrong!

In contrast, doing math was entirely different. After trying it for a while, I realized that I could take my time, try alternative beginnings, do one step after another, and get to glimpse all kinds of possibilities along the way. I also realized that it would allow me to understand some things about the world that I hungered after – like why the speed of light was a boundary that we couldn’t cross.

As I went on, I found problems that appeared to have more than one solution (not necessarily the same solution!), but when I realized which one was wrong, it was very satisfying. So I knew after a while that math was right for me.

Edie & Marco: What is your favorite branch of math?

NJ: I started out liking analysis. This is an area that naturally grows from questions in calculus and is connected with understanding solutions of equations, called differential equations, which involve derivatives of functions. When you throw a ball and predict where it will land, you are actually solving one of these types of equations!

But as I did more and more math, I realized that all of mathematics is inter-connected and I came to love geometry and algebra. Right now, I am learning about an area in algebra that describes reflections. 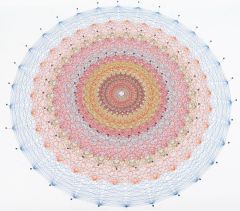 A model of E8 made of thread.
E8 is the 8-dimensional mathematical structure that Nalini is studying.

Think about a vector v, put a mirror perpendicular to it and reflect other vectors in this mirror. The other vectors are only allowed in the system if they make specific angles (relative to v) that are found in crystals. It is easy to do this in two dimensions. But it turns out there are exceptional systems that only occur in eight dimensions. And, this amazing eight-dimensional system comes up in a differential equation I am studying! So my favourite branch of math right now is the geometry described by such reflection systems.

MM: Can you describe a time when mathematics really surprised you?

NJ: At third year in university I did all the math courses I could. There for the first time, I found that two different approaches to math problems led me to two different answers! That was surprising. At first, I couldn’t see anything wrong with either approach. But I learnt a very valuable lesson: I learnt to face a contradiction. That led me to develop other skills, for example, learning to resolve paradoxes by using simpler problems as models.

Mathematics still continues to surprise me, particularly when I discover interconnections between vastly different areas. (See previous answer about the eight-dimensional reflection group.)

MM: How would you describe a soliton to a person-on-the-street?

NJ: When two billiard balls, say a red and a green one, collide on a table, you expect them to continue being the same billiard balls after the collision. They continue moving along straight lines but at different angles. That doesn’t usually happen when waves collide and break at a beach. Solitons are waves that behave like billiard balls.

The surprising thing is that, for solitons, the collision is non-linear. The individual heights of colliding solitons just before collision don’t add up to give you the height of combined object during collision. The preservation of identity after collision is an exceptional feature in non-linear systems, yet systems with soliton solutions come up almost everywhere as mathematical models.

MM: What is a problem or conjecture that you would love to see resolved?

NJ: I would love to see a proof of the Riemann hypothesis. This is the conjecture proposed in 1859 about the location of zeroes of Riemann’s zeta function. These zeroes are related to prime numbers.

In part, my liking for this conjecture is because there is something fascinating about prime numbers. But also, some of my favourite functions give information about the distributions of large prime numbers and I’d like to see more connections between number theory and what I work on. Another reason is that when a longstanding conjecture like this one is resolved, it will inevitably lead to huge developments across many fields in mathematics.

MM: Who are some of your mathematical heros?

NJ: I have several mathematical heroes, but my favourite is Sofia (also called Sonya) Kovalevskaya, who was born in 19th century Russia. There is a lovely story about how she learnt mathematics at a young age from calculations on sheets of notepaper used as wallpaper in her nursery. To study more advanced mathematics, she had to leave home and travel to Germany. To enable her to travel, she had to arrange a marriage (a woman could only get a passport to leave Russia if her father or husband gave permission). She wasn’t allowed to enrol as a student at a university in Germany so she had to find someone to give her private tuition. She found Karl Weierstrass, who is one of my other mathematical heroes. She ended up doing wonderful mathematical work, won a prize for her PhD thesis, and became the first woman Professor at a European university (in Sweden). Her ideas in mathematics continue to influence me.

MM: What do you like to do besides math in your spare time?

NJ: I read, spend time with my family, cook, walk in the bush and play the piano.

MM: What was the experience like of making an autobiographical film?

NJ: I had no idea what it would be like. Trixie Barretto (the film maker) brought a camera, a laptop, a microphone and a light source with a shade to my office. She asked me questions along the lines that she had emailed me about before. She told me not to worry about what I wore, or how I looked, but to be authentic and talk about things that I felt were important. I focused on it being a one-to-one conversation with Trixie and tried to be open. The whole experience took two to three hours.

Layla: What’s some advice you have for young girls across the globe with mathematical/scientific interests?

NJ: Be true to yourself. If you don’t know yet what you are interested in, try learning or reading about different areas of science. Let your experience of what you like, or don’t like, guide you in your next steps. Find people who know what they are doing, who can give you different types of advice. Be open to feedback, whether it is positive or negative. If you can, do the hard courses. And do the things that you enjoy. Have fun!