First up, a little about one of my favorite things to do (and part of what got me into math in the first place!): hair braiding. If you’ve ever done a complicated braid in someone’s hair before, you might have had an inkling that something mathematical was going on. Well, you’re right! Mathematicians Gloria Ford Gilmer and Ron Eglash have spent much of their careers studying and teaching about the math that goes into hair braiding.

In their research, Gloria and Ron investigate how math can improve hair braiding, how hair braiding can improve math, and how the overlap between the two can teach us about how different cultures use and understand math. As Gloria shows in her article on math and braids, tessellations are very important to braided designs.

And so are fractals! Ron studies how fractals are used in African and African American designs, including in the layouts of towns, tile patterns, and cornrow braids. (Watch his TED Talk to learn more!) On his beautiful website dedicated to the math of cornrows, Ron shows how braiders use tools essential to making fractals to design their braids.

Just like when making a fractal, braid designers repeat the same shape while shifting, rotating, reflecting, and shrinking it. You can design your own mathematical cornrow braid using Ron’s braid programming app! If you’ve ever used Scratch, this app will look very familiar. I made the spiral braid on the right using the app. Next challenge: try to make your braid on a real head of hair…

Next up, a little about something I wish I could do: make awesome 3D-printed art! Here’s a blog that might help me (and you) get started. Mathematician Laura Taalman (who calls herself @mathgrrl on Twitter) writes a blog called Hacktastic all about making math designs, using a 3D-printer and many other tools. She has designs for all kinds of awesome things, from Menger sponges to trigonometric bracelets. One of the best things about Laura’s site is that she tells you the story behind how she came up with her designs, along with all the instructions and code you’ll ever need to make her designs yourself.

Finally, a little about something I’m trying to learn to do better: rock climbing! Mathematician Skip Garibaldi loves both math and rock climbing– so he decided to combine his interests for the better of each. In this video, Skip discusses some of the mathematical ideas important to rock climbing– including some essential to a type of climbing that I find most intimidating, lead climbing. Check it out!

Happy New Year, and welcome to this week’s Math Munch!

Exciting news, folks! The Golden Ratio curve– that beautiful spiral that everyone adores– has evolved. And not into a freak of nature, either! Into something– dare I say it?– even more beautiful…

Meet the Harriss spiral. It was discovered/invented by mathematician and artist Edmund Harriss (featured before here and here) when he began playing around with golden rectangles. A golden rectangle is a very special rectangle, whose sides are in a particular proportion. You can read more about them here— but what’s most important to this new discovery is what you can do with them. If you make a square inside a golden rectangle you get another golden rectangle– and continuing to make squares and new golden rectangles inside of ever-shrinking golden rectangles, and drawing arcs through the squares, is one way to make the beautiful golden ratio spiral.

Edmund Harriss decided to get creative. What would happen, he wondered, if he cut the golden rectangle into two similar rectangles (same shape, just one is a scaled-down version of the other) and a square? And then what if he did the same thing to the new rectangles, again and again to make a fractal? Edmund’s new golden rectangle fractal makes this pattern, and when you draw a spiral through it, you get a lovely branching shape.

But don’t take my word for it. Math journalist Alex Bellos broke the news just this week in his article in The Guardian. His article explains much, much more than I can here– check it out to learn many more wonderful things about the Harriss spiral (and other spirals that Harriss has created…)!

Next up is a site that sounds quite a lot like Math Munch. But it’s all games and cartoons, all the time. (Maybe that means you’ll like it better…) Check out Math Snacks, a site developed by a group of math educators at New Mexico State University. They worked hard to create games and animations that are both fun and full of interesting math.

One of my favorite games on Math Snacks is called Game Over Gopher.In this game, you have to save your carrot from an army of gophers by placing little machines that feed the gophers. Where’s the math, you may wonder? Placing the gopher-feeders and the other equipment that can help you save the carrot requires you to think carefully about geometry and coordinates.

Finally, speaking of games, here’s one of my favorites. I love to play SET, and I recently found a way to play online– either against a friend or against the computer. Click on this link to start your own game!

To play SET, you deal 12 cards. Then, you try to find a group of 3 cards that all share and all don’t share the same characteristics. For example, in the picture to the right– do you see the cards with the empty red ovals? They’re all the same shape, shading, and color (oval, empty, red), but they’re all different numbers (1, 2, and 3). Can you find any other sets in the picture? (Hint: One involves purple.)

Want to hone your SET skills without competing? Here’s a daily SET puzzle to challenge you.

Enjoy the games (and maybe invent a spiral of your own) and bon appetit! 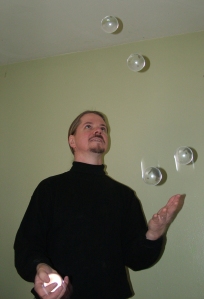 Last week, Justin told you about our time at Bridges 2012, the world’s largest conference of mathematics and art, and I must reiterate: this was one of the coolest things I’ve ever been a part of. The art was gorgeous. The people were great. I’m pretty sure I was beaming with excitement. At dinner we met, Mike Naylor, a mathematical artist and generally fantastic guy living in Norway. You can read his full artist’s statement and artwork from the Bridges exhibition, but here’s an excerpt:

“Much of my artwork focuses on the use of the human body to represent geometric concepts, but I also enjoy creating abstract works that capture mathematical ideas in ways that are pleasing, surprising and invite further reflection.”

Meeting Mike was especially exciting for me, because just days earlier, I’d fallen in love with Mike’s math blog. This week, I’ll be sharing some of the gems I’ve found there:

I didn’t even mention abacaba.org, yet another amazing Mike Naylor project.  It’s a site devoted entirely to one pattern: A, aBa, abaCaba, abacabaDabacaba,…

The most squares of whole area that will fit in a square of area 17.

Speaking of mazes, I found a whole bunch of cool ones when I was poking around the Math Magic site hosted by Stetson University. Each month Math Magic poses a math question for readers to work on and then submit their solutions. This month’s question is about packing squares in squares. (Click to see the submissions so far.)  At the bottom of the page you can find links to many more cool math sites, but as promised, I’ll share some of the mazes I found.

A puzzle designer for over 40 years, here Andrea Gilbert lays across one of her step-over sequence mazes.

First there’s Andrea Gilbert’s site, Click Mazes, which has all sorts of online mazes and puzzles.  In the picture you can see Andrea laying in one of her step-over sequence mazes.  How do you figure they work?

Then there’s Logic Mazes, a website of mazes by Robert Abbott. I don’t know much about Robert, but his site caught my eye because it begins with Five Easy Mazes: 1 2 3 4 5, but there are better mazes after that. I really liked the number mazes. Play around, think your way through, and have some fun!