We gave you a taste of some of Vi Hart’s math art last week with her balloon creations.  This week, we’re featuring some of Vi’s doodling in math class art – her Apollonian gaskets!  An Apollonian gasket is a fractal made by drawing a big circle, drawing two or three (or more!) smaller circles inside of it so that they fit snugly, and then filling all of the left-over empty space with smaller and smaller circles.  Here’s the video in which Vi tells how she draws Apollonian gaskets with circles and other shapes (and how she makes other awesome things like an infinitely long caravan of camels fading into the distance).  And here are some more Apollonian gaskets made by filling other shapes with circles from Math Freeze.

Next, you may have seen a magic square before, a number puzzle in which you fill a square grid with numbers so that each row, column, and diagonal have the same sum.  (Play with one here.)  But have you ever seen a geomagic square?

Magic squares have been around for thousands of years, but in 2001, Lee Sallows started thinking about them in a new way.  Lee realized that you could think of the numbers in the square as sticks of particular lengths, and the number being added to as an amount of space you were trying to fill with those sticks.  That led him to try to make magic squares out of things like pentominoes and other polyominoes, butterflies,  and many other shapes!  Aren’t they beautiful? 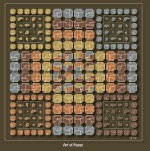 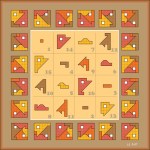 Finally, what do marbles, binary, and wooden levers have in common?  Mathematical artist, designer, and wood-worker Matthias Wandel built a binary adding machine that uses marbles and wooden gates!  Here’s a video demonstrating how it works:

Matthias doesn’t only build calculators.  Here’s a marble elevator and a machine that you can take apart and reassemble to make a new track.