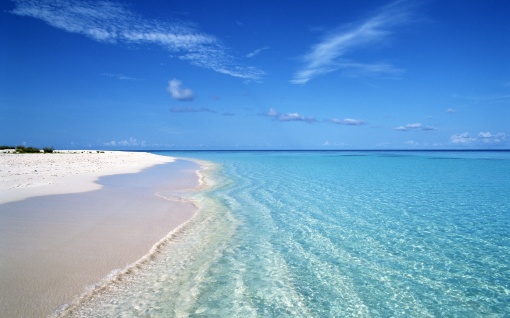 Ah, summertime. If it’s as hot where you are as it is here in New York, I bet this beach looks great to you, too. A huge expanse of beach all to myself sounds wonderful… And that makes me wonder – how much coastline is there in the whole world?

Interestingly, the length of the world’s coastline is very much up for debate. Just check out this Wikipedia page on coastlines, and you’ll notice that while the CIA calculates the total coastline of the world to be 356,000 kilometers, the World Resources Institute measures it to be 1,634,701! What???

Measuring the length of a coastline isn’t as simple as it might seem, because of something called the Coastline Paradox. This paradox states that as the ruler you use to measure a coastline gets shorter, the length of the coastline gets longer – so that if you used very, very tiny ruler, a coastline could be infinitely long! This excellent video by Veritasium explains the problem very well:

As Vertitasium says, many coastlines are fractals, like the Koch snowflake shown at left – never-ending, infinitely complex patterns that are created by repeating a simple process over and over again. In this case, that simple process is the waves crashing against the shore and wearing away the sand and rock. If coastlines can be infinitely long when you measure them with the tiniest of rulers, how to geographers measure coastline? By choosing a unit of measurement, making some approximations, and deciding what is worth ignoring! And, sometimes, agreeing to disagree.

Need something to read at the beach, and maybe something puzzle-y to ponder? Check out this interesting article by four mathematicians and computer scientists, including James Henle, a professor in Massachusetts. They’ve invented a Sudoku-like puzzle they call a “Clueless Puzzle,” because, unlike Sudoku, their puzzle never gives any number clues.

How does this work? These puzzles use shapes instead of numbers to provide clues. Here’s an example from the paper: Place the numbers 1 through 6 in the cells of the figure at right so that no digit appears more than once in a row or column AND so that the numbers in each region add to the same sum. The paper not only walks you through the solution to this problem, but also talks about how the mathematicians came up with the idea for the puzzles and studied them mathematically. It’s very interesting – I recommend you read it!

Finally, if you’re not much of a beach reader, maybe you’d like to make some geometrically-inspired beach art! Check out this land art by artist Andy Goldsworthy:

Or make one of these!