I’ve been really into squares lately. Maybe it’s because I recently ran across a new puzzle involving squares– something called Mrs. Perkin’s quilt.

The original version of the puzzle was published way back in 1907, and it went like this: “For Christmas, Mrs. Potipher Perkins received a very pretty patchwork quilt constructed of 169 square pieces of silk material. The puzzle is to find the smallest number of square portions of which the quilt could be composed and show how they might be joined together. Or, to put it the reverse way, divide the quilt into as few square portions as possible by merely cutting the stitches.” 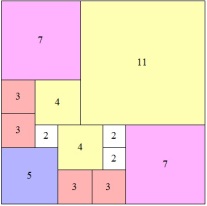 Said in another way, if you have a 13 by 13 square, how can you divide it up into the smallest number of smaller squares? Don’t worry, you get to solve it yourself– I’m not including a picture of the solution to that version of the puzzle because there are so many beautiful pictures of solutions to the puzzle when you start with larger and smaller squares. Some are definitely more interesting than others. If you want to start simple, try the 4 by 4 version. I particularly like the look of the solution to the 18 by 18 version.

Maybe you’re wondering where I got all these great pictures of Mrs. Perkin’s quits. And– wait a second– is that the solution to the 152 by 152 version? It sure is– and I got it from one of my favorite math websites, the Wolfram Demonstrations Project. The site is full of awesome visualizations of all kinds of things, from math problems to scans of the human brain. The Mrs. Perkin’s quilts demonstration solves the puzzle for up to a 1,098 by 1,098 square!

Next up, we here at Math Munch are big fans of unusual calculators. Marble calculators, domino calculators… what will we turn up next? Well, here for your strange calculator enjoyment is a water calculator! Check out this video to see how it works:

I might not want to rely on this calculator to do my homework, but it certainly is interesting! 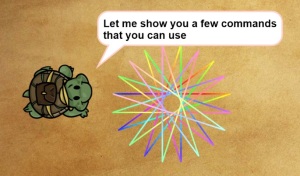 On the website Tynker, Snap can show you how to design a program to make intricate line drawings– and learn something about computer programming at the same time. Tynker’s goal is to teach kids to be programming “literate.” Combine computer programming with a little math and art (and a turtle)– what could be better?

I hope something grabbed your interest this week! Bon appetit!

I recently ran across a very ancient puzzle with a very modern solution– and a very funny name. It’s called the Stomachion, and it looks like this:

So, what do you do? The puzzle is made up of these fourteen pieces carved out of a 12 by 12 square– and the challenge is to make as many different squares as possible using all of the pieces. No one is totally sure who invented the Stomachion puzzle, but it’s definite that Archimedes, one of the most famous Ancient Greek mathematicians, had a lot of fun working on it.

It’s clear that you can arrange the Stomachion pieces into a square in at least one way– because that’s how they start before you cut them out. But is there another way to do it? And, if there’s a second way, is there a third? How about a fourth? Because Archimedes was wondering about how many ways there are to make a square with Stomachion pieces, some mathematicians give him credit for being an inventor of combinatorics, the branch of math that studies counting things.

It turns out that there are many, many ways to make squares (the picture above shows all of them– click on it for greater detail)– and Archimedes didn’t find them all. But someone else did, over 2,000 years later! He used a computer to solve the problem– something Archimedes could never have done– but mathematician Bill Cutler found that there are 536 ways to make a square with Stomachion pieces! That’s a lot! If you’ve tried to make squares with the pieces, you might be particularly surprised– it’s pretty tricky to arrange them into one unique square, let alone 536. This finding was such a big deal that it made it into the New York Times. (Though you may notice that the number reported in the article is different– that’s how many ways there are to make a square if you include all of the solutions that are symmetrically the same.)

Other mathematicians have worked on finding the number of ways to arrange the Stomachion pieces into other shapes– such as triangles and diamonds. Given that it took until 2003 for someone to find the solution for squares, there are many, many open questions about the Stomachion puzzle just waiting to be solved! Who knows– if you play with the Stomachion long enough, maybe you’ll discover something new!

Next up, the mathematicians over at Numberphile have worked out a solution to a problem that plagued me a few weeks ago while I was camping– choosing the best outdoor toilet to use without checking all of them for grossness first. Is there a way to ensure that you won’t end up using the most disgusting toilet without having to look in every single one of them? Turns out there is! Watch this video to learn how:

Finally, a little blast from the past. Almost two years ago I share with you a video of something really awesome– a computer made entirely out of dominoes! Well, this year, some students and I finally got the chance to make one of our own! It very challenging and completely exhausting, but well worth the effort. Our domino computer recently made its debut on the mathematical internet, so I thought I’d share it with all of you! Enjoy! 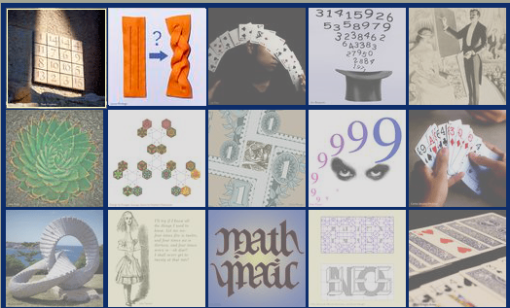 A few of the mathy morsels that await you this month on mathaware.org!

Each day this month a new piece of magical or mysterious math will be revealed on the MAM site. The mathematical offering for today is a card trick that’s based on the Fibonacci numbers. Dipping into this site from time to time would be a great way for you to have a mathy month.

It is white’s turn to move. Who will win this Hexapawn game?

Speaking of Martin Gardner, I recently ran across a version of Hexapawn made in the programming language Scratch. Hexapawn is a chess mini-game involving—you guessed it—six pawns. Martin invented it and shared it in his Mathematical Games column in 1962. (Here’s the original column.) The object of the game is to get one of your pawns to the other side of the board or to “lock” the position so that your opponent cannot move. The pawns can move by stepping forward one square or capturing diagonally forward. Simple rules, but winning is trickier than you might think!

The program I found was created by a new Scratcher who goes by the handle “puttering”. On the site he explains:

I’m a dad. I was looking for a good way for my daughters to learn programming and I found Scratch. It turns out to be so much fun that I’ve made some projects myself, when I can get the computer…

Something that’s super cool about puttering’s Hexapawn game is that the program learns from its stratetgy errors and gradually becomes a stronger player as you play more! It’s well worth playing a bunch of games just to see this happen. puttering has other Scratch creations on his page, too—like a solver for the Eight Queens puzzle and a Secret Code Machine. Be sure to check those out, too!

Last up, our friend Nalini Joshi recently travelled to a meeting of the Australian Academy of Science, which led to a little number puzzle.

What unusual ways of describing a number! Trying to learn about these terms led me to an equally unusual calculator, hosted on the Math Celebrity website. The calculator will show you calculations about the factors of a numbers, as well as lots of categories that your number fits into. Derek Orr of Math Year-Round and I figured out that Nalini’s clues fit with multiple numbers, including 185, 191, and 205. So we needed more clues!

Can you find another number that fits Nalini’s clues? What do you think would be some good additional questions we could ask Nalini? Leave your thoughts in the comments!

A result from the Number Property Calculator

I hope this post helps you to kick off a great Mathematics Awareness Month. Bon appetit!