A website that’s worth returning to again and again is the Wolfram Demonstrations Project (WDP). Since it was founded in 2007, users of the software package Mathematica have been uploading “demonstrations” to this website—amazing illuminations of some of the gems of mathematics and the sciences.

Each demonstration is an interactive applet. Some are very simple, like one that will factor any number up to 10000 for you. Others are complex, like this one that “plots orbits of the Hopalong map.”

Some demonstrations are great for visualizing facts about math, like these:

There’s also a whole category of demonstrations that can be used as MArTH—mathematical art—tools, including these:

With over 8000 demonstrations to explore and new ones being added all the time, you can see why the Wolfram Demonstrations Project is worth returning to again and again!

Next up, check out this number tree. It was created by Jeffrey Ventrella, an innovator, artist, and computer programmer who lives in San Francisco. His number tree arranges the numbers from 1 to 100 according to their largest proper factors. For instance, the factors of 18 are 18, 9, 6, 3, 2, and 1. Once we toss out 18 itself as being “improper”—a.k.a. “uninteresting”—the largest factor of 18 is 9. This in turn has as its largest factor 3, and 3 goes down to 1. Chains of factors like this one make up Jeffrey’s tree. It has a wonderful accumulative feeling to it—it’s great to watch how patterns and complexity build up over time.

(On this theme, WDP also has a demonstrations about trees and about prime factorization graphs.)

Cloctal: “a fractal design that visualizes the passage of time”

There’s lots more math to explore on Jeffrey’s website. His piece Cloctal—a fractal clock—is one of my favorites. What I’d like to feature here, though, is the diverse and intricate work Jeffrey has done with plane-filling and space-filling curves.  You can find many examples at fractalcurves.com, Jeffrey’s website that’s chock full of great links.

Jeffrey recently completed a book called Brainfilling Curves. It’s “a visual math expedition, lead by a lifelong fractal explorer.” According to the description, the book picks up where Mandelbrot left off and develops an intuitive scheme for understanding an “infinite universe of fractal beauty.” 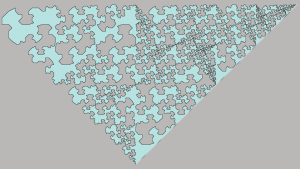 An example of a “brainfilling curve” from Jeffrey’s “root8” family

The title comes from the idea that nature uses space-filling curves quite often, to pack intestines into your gut or lots and lots of tissue into the brain you’re using to read this right now! Hopefully you’re finding all of this math quite brainfilling as well.

(And just one more example of why WDP is worth revisiting: here’s a demonstration that depicts the space-filling Hilbert and Moore curves. So much good stuff!)

Finally, here’s a video that Jeffrey made about brainfilling curves. You can find more on his YouTube channel.

What you see there is a 10 pound note. You know, British money. So who’s that guy on there? Must be a president or king or prime minister or something, right? NO! That’s Alan Turing, one of the most important mathematicians of the 20th century. During WWII, he was a codebreaker for the Allies, intercepting German submarine codes. His analysis of the Enigma Machine was a huge turning point in the war. (video explanation)

In England they put the queen on one side of the money, but the other’s used for significant Brits. Charles Darwin is currently on the 10 pound note, but these things change, and there’s a petition to get Turing on the ten. A Turing Tenner, as they call it. It’s all part of Turing’s 100th birthday celebration.

Since Turing did some of the earliest work on computing theory and artificial intelligence, Google paid tribute to the computer legend with a recent doodle. It’s a fantastic little puzzle game based on his work. I’ll let you figure it out, but definitely try this one. Click here to play!

In last week’s munch, Justin introduced us to the Yoshimoto Cube, and we’ve kept on thinking about it.  Here’s a couple simple templates for making one cubelet.  (template 1, template 2)  Make 8 of those and hinge them together with some tape.  I made a short video to show you how to connect them.  But it didn’t end there!

A flat template for a 3D model like that is called a net or a mesh.  Do you know any nets for a cube?  There’s actually lots.  Check out this site, where it’s your job to figure out which nets fold up into a cube and which ones don’t.  It’s a lot of fun.  Here’s another net site showing lots of nets for a pyramid, dodecahedron, and a whole bunch of other solid shapes.  How many do you think there are for a tetrahedron?  Can you design one for an octahedron? 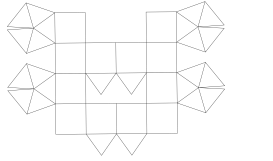 The Mega-Monster Mesh
A one-sheet model for the Yoshimoto cube.

Yoshimoto cube, and I think I succeeded!  The tape on my hinges kept breaking, so I wanted to try to make paper hinges.  With my first attempt, which I called The Monster Mesh, I was able to design a net for half of the star.  Down from 8 tape hinges to 2 was a big improvement, but last night I got it perfect!  Using my new version, The Mega-Monster Mesh,  you can make the entire cube without any taped hinges!  The model is pretty complicated, so if you want to give it a shot, feel free to email us at MathMunchTeam@gmail.com with any questions.

Finally, something I’m really really proud of.  Justin and I spent most of Sunday afternoon on the floor of my apartment making a stop motion animation of with Yoshimoto Cube models.  It’s called “Yoshimoto Friends,” and we hope you love it as much as we do.  (We used the free iMotionHD app for iPad and iPhone, in case you want to make your own stop motion animation.)

I made another video showing how the mega-monster mesh folds up.  Here it is, acting like a transforming bug!