There’s a neat old problem/puzzle that goes like this: make a 3-D shape that could fit snugly through each of three holes—one a square, one a circle, and one a triangle. To make a shape that works for just two holes isn’t so tricky. For example, a cylinder that is just as tall as it is across would fit snugly through a circle hole and a square hole. Can you think of what would work for each of the other two shape combos? What about all three? 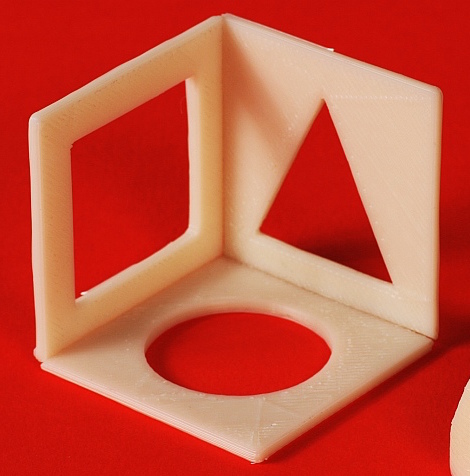 Three holes, three shapes…and what’s that over in the corner??

If you’re curious about the answer, you might enjoy this post by Kit Wallace or this page by George Hart or—believe it or not—roundsquaretriangle.com. I don’t know the origin of this puzzle and would love to. I haven’t found any info about it after to poking around the internet for a while. So if you locate any information about the backstory of the squircangle—which is not its real name, just one that I made up—please let us know!

Even though I knew about the square-circle-triangle problem, I was not at all prepared to encounter the solution to the jet-butterfly-dragon problem!

As a scientist and artist, I am interested in the how perception influences our theory of the universe. … Every 120º of rotation, the amorphous shadows evolve into independent forms. Our scientific interpretation of nature often depends upon our point of view. Perspective matters.

There’s much more to see on John’s website. And you can check out Dragon Butterfly Jet in action in the video below, along with Knight Mermaid Pirate-Ship. I also recommend this video made by John where he demonstrates how his sculpture works himself. It also includes a stop-frame animation of the sculpture being built! So cool.

And finally, what you’ve all been waiting for…

That’s right! My final share of the week is that most outspoken of punctuation marks, the ellipsis. Because often what you don’t say says a whole lot! That’s true when writing a story or some dialogue, and it’s also true in mathematics. Watch: 1+2+3+…+100. See? Pretty neat! Those three dots sure say a mouthful…

The ellipsis is probably my second favorite punctuation mark—after the em dash, of course. But don’t take my word for it. Instead, check out this article about the history and uses—mathematical and otherwise—of the humble ellipsis. Author Cameron Hunt McNabb writes:

Thus the ellipsis has been used to indicate anything from the erroneous to the irrational, and its intrigue lies in resistance to meaning. As long as we have things to say, we will have things to omit.

I could go on and on about the ellipsis, just like pi does: 3.1415… But anyway, while we’re on the subject of punctuation, let me point you to one of my favorite sites on the mathematical internet: the Earliest Uses of Various Mathematical Symbols page, maintained by Jeff Miller. Jeff teaches high school math in Florida and also has some other great pages, too, including this one about mathematicians featured on stamps.

A nice visualization of the squircangle by Matt Henderson

Welcome to this week’s Math Munch!  We have so many exciting things to share with you this week – so let’s get started!

Something very exciting to math lovers all over the world happened on Saturday.  The Museum of Mathematics opened its doors to the public!

The Museum of Mathematics (affectionately called MoMath – and that’s certainly what you’ll get if you go there) is in the Math Munch team’s hometown, New York City.

There are so many awesome exhibits that I hardly know where to start.  But if you go, be sure to check out one of my favorite exhibits, Twist ‘n Roll.  In this exhibit, you roll some very interestingly shaped objects along a slanted table – and investigate the twisty paths that they take.  And you can’t leave without seeing the Human Tree, where you turn yourself into a fractal tree.

Or going for a ride on Coaster Rollers, one of the most surprising exhibits of all.  In this exhibit, you ride in a cart over a track covered with shapes that MoMath calls “acorns.”  The “acorns” aren’t spheres – and yet your ride over them is completely smooth!  That’s because these acorns, like spheres, are surfaces of constant width.  That means that if you pick two points on opposite ends of the acorn – with “opposite” meaning points that you could hold between your hands while your hands are parallel to each other – the distance between those points is the same regardless of the points you choose.  See some surfaces of constant width in action in this video:

Maybe you don’t live in New York, so you won’t be able to visit the museum anytime soon.  Or maybe you want a little sneak-peek of what you’ll see when you get there.  In any case, watch this video made by mathematician, artist, and video-maker George Hart on his first visit to the museum.  George also worked on planning and designing the exhibits in the museum.

We got the chance to interview Emily Vanderpol, the Outreach Exhibits coordinator for MoMath, and Melissa Budinic, the Assistant Exhibit Designer for MoMath.  As Cindy Lawrence, the Associate Director for MoMath says, “MoMath would not be open today if it were not for the efforts” of Emily and Melissa.  Check out Melissa and Emily‘s interviews to read about their favorite exhibits, how they use math in their jobs for MoMath, and what they’re most excited about now that the museum is open!

Finally, meet Tim and Tanya Chartier.  Tim is a math professor at Davidson College in North Carolina, and Tanya is a language and literacy educator.  Even better, Tim and Tanya have combined their passion for math and teaching with their love of mime to create the art of Mime-matics!  Tim and Tanya have developed a mime show in which they mime about some important concepts in mathematics.  Tim says about their mime-matics, “Mime and math are a natural combination.  Many mathematical ideas fold into the arts like shape and space.  Further, other ideas in math are abstract themselves.  Mime visualizes the invisible world of math which is why I think math professor can sit next to a child and both get excited!”

One of my favorite skits, in which the mime really does help you to visualize the invisible world of math, is the Infinite Rope.  Check it out: 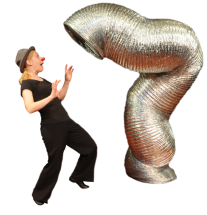 In another of my favorite skits, Tanya interacts with a giant tube that twists itself in interesting topological ways.  Watch these videos and maybe you’ll see, as Tanya says, how a short time “of positive experiences with math, playing with abstract concepts, or seeing real live application of math in our world (like Google, soccer, music, NASCAR, or the movies)  can change the attitude of an audience member who previously identified him/herself as a “math-hater.””  You can also check out Tim’s blog, Math Movement.

Tim and Tanya kindly answered some questions we asked them about their mime-matics.  Check out their interview by following this link, or visit the Q&A page.