You might remember our post on Tilman Zitzmann’s project called Geometry Daily. If you haven’t seen it before, go check it out now! It will help you to appreciate Lawrie Cape’s work, which both celebrates and extends the Geometry Daily project. Lawrie’s project is called Tangent Spaces. He makes Tilman’s geometry sketches move!

Not only do Lawrie’s sketches move, they’re also interactive—you can click on them, and they’ll move in response. All kinds of great mathematical questions can come up when you set a diagram in motion. For instance, I’m wondering what moon patterns are possible to make by dragging my mouse around—and if any are impossible. What questions come up for you as you browse Tangent Spaces?

Next up, Dorry Segev and Sommer Gentry are a doctor and a mathematician. They collaborated on a new system to help sick people get kidney transplants. They are also dance partners and husband and wife. This video shares their amazing, mathematical, and very human story.

Dorry and Sommer’s work involves building graphs, kind of like the game that Paul posted about last week. Thinking about the two of them together has been fun for me. You can read more about the life-saving power of Kidney Paired Donation on optimizedmatch.com.

Last up this week, here’s some very fresh math—discovered in the last 24 hours! Joe O’Rourke is one of my favorite mathematicians. (previously) Joe recently asked whether a golyhedron exists. What’s a golyhedron? It’s the 3D version of a golygon. What’s a golygon? Glad you asked. It’s a grid polygon that has side lengths that grow one by one, from 1 up to some number. Here, a diagram will help: 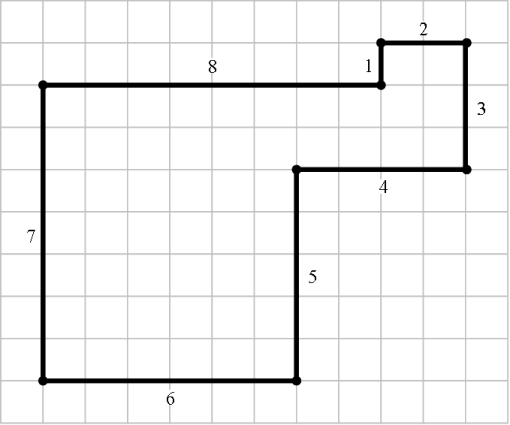 The smallest golygon. It has sides of lengths 1 through 8.

A golyhedron is like this, but in 3D: a grid shape that has one face of each area from 1 up to some number. After tinkering around some with this new shape idea, Joe conjectured that no golyhedra exist. It’s kind of like coming up with the idea of a unicorn, but then deciding that there aren’t any real ones. But Joseph wasn’t sure, so he shared his golyhedron shape idea on the internet at MathOverflow. Adam P. Goucher read the post, and decided to build a golyhedron himself.

And he found one! 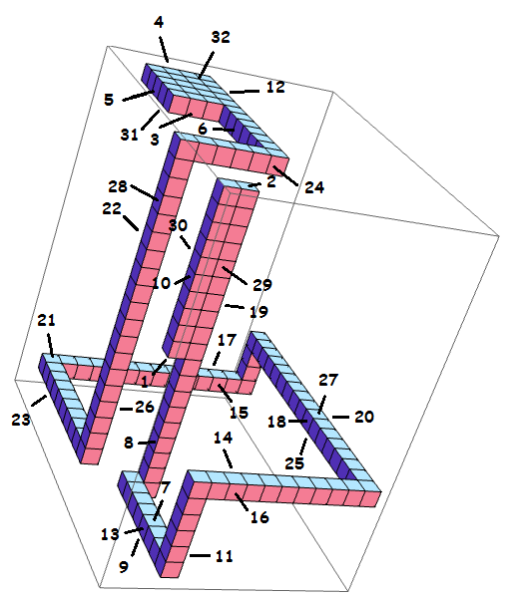 The first ever golyhedron, by Adam P. Goucher

Adam wrote all about the process of discovering his golyhedron in this blog post. I recommend it highly.

And the story and the math don’t stop there! New questions arise—is this the smallest golyhedron? Are there types of sequences of face sizes that can’t be constructed—for instance, what about a sequence of odd numbers? Curious and creative people, new discoveries, and new questions—that’s how math grows.

If this story was up your alley, you might enjoy checking out the story of holyhedra in this previous post.

Here’s a little game with a big name: tsoro yematatu. If you enjoyed Paul’s recent post about tic-tac-toe, I think you’ll like tsoro yematatu a lot.

I ran across this game on a website called Behind the Glass. The site is run by the Cincinnati Art Museum. (What is it with me and art museums lately?) The museum uses Behind the Glass to curate many pieces of African art and culture, including four mathematical games that are played in Africa.

The simplest of these is tsoro yematatu. It has its origin in Zimbabwe. Like tic-tac-toe, the goal is to get three of your pieces in a row, but the board is “pinched” and you can move your pieces. Here’s an applet where you can play a modified version of the game against a computer opponent. While the game still feels similar to tic-tac-toe, there are brand-new elements of strategy.

Tsoro yematatu reminds me of one that I played as a kid called Nine Men’s Morris. I learned about it and many other games—including go—from a delightful book called The Book of Classic Board Games. Kat Mangione—a teacher, mom, and game-lover who lives in Tennessee—has compiled a wonderful collection of in-a-row games. And wouldn’t you know, she includes Nine Men’s Morris, tsoro yematatu, tic-tac-toe, and dara—another of the African games from Behind the Glass.

The board for tsoro yematatu also reminds me of the Fano plane. This mathematical object is very symmetric—even more than meets the eye. Notice that each point is on three lines and that each line passes through three points. The Fano plane is one of many projective planes—mathematical objects that are “pinched” in the sense that they have vanishing points. They are close cousins of perspective drawings, which you can check out in these videos.

Can you invent a game that can be played on the Fano plane?

Closely related to the Fano plane is an object called the Klein quartic. They have the same symmetries—168 of them. Felix Klein discovered not only the Klein quartic and the famous Klein bottle, but also the gorgeous Kleinian groups and the Beltrami-Klein model. He’s one of my biggest mathematical heroes.

This article about the Klein quartic by mathematician John Baez contains some wonderful images. The math gets plenty tough as the article goes on, but in a thoughtfully-written article there is something for everyone. One good way to learn about new mathematics is to read as far as you can into a piece of writing and then to do a little research on the part where you get stuck.

If you’ve enjoyed the animation of the Klein quartic, then I bet my last find this week will be up your alley, too. It’s a Tumblr by David Whyte and Brian Fitzpatrick called Bees & Bombs. David and Brian create some fantastic GIFs that can expand your mathematical imagination.

This one is called Pass ‘Em On. I find it entrancing—there’s so much to see. You can follow individual dots, or hexagons, or triangles. What do you see?

This one is called Blue Tiles. It makes me wonder what kind of game could be played on a shape-shifting checkerboard. It also reminds me of parquet deformations.

A few of my other favorites are Spacedots and Dancing Squares. Some of David and Brian’s animations are interactive, like Pointers. They have even made some GIFs that are inspired by Tilman Zitzmann’s work over at Geometry Daily (previously).

I hope you enjoy checking out all of these new variations on some familiar mathematical objects. Bon appetit! 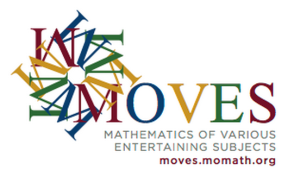 The Math Munch team just wrapped up attending the first MOVES Conference, which was put on by the Museum of Math in NYC. MOVES is a recreational math conference and stands for Mathematics of Various Entertaining Subjects. Anna coordinated the Family Activities track at the conference and Paul gave a talk about his imbalance problems. I was just there as an attendee and had a blast soaking up wonderful math from some amazing people!

Who all was there? Some of our math heroes—and familiar faces on Math Munch—like Erik Demaine, Tanya Khovanova, Tim and Tanya Chartier, and Henry Segerman, just to name just a few. I got to meet and learn from many new people, too! Even though I know it’s true, it still surprises me how big and varied the world of math and mathematicians is. 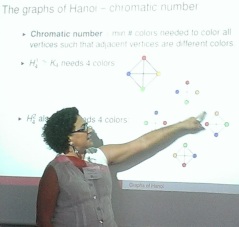 One of my favorite talks at MOVES was given by Suzanne Dorée of Augsburg College. Su spoke about research she did with a former student—Danielle Arett—about the puzzle known as the Tower of Hanoi. You can try out this puzzle yourself with this online applet. The applet also includes some of the puzzle’s history and even some information about how the computer code for the applet was written. 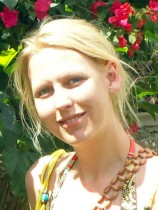 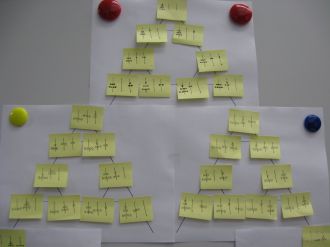 A piece of a Tower of Hanoi graph with three pegs and four disks.

But back to Su and Danielle. If you think of the different Tower of Hanoi puzzle states as dots, and moving a disk as a line connecting two of these dots, then you can make a picture (or graph) of the whole “puzzle space”. Here are some photos of the puzzle space for playing the Tower of Hanoi with four disks. Of course, how big your puzzle space graph is depends on how many disks you use for your puzzle, and you can imagine changing the number of pegs as well. All of these different pictures are given the technical name of Tower of Hanoi graphs. Su and Danielle investigated these graphs and especially ways to color them: how many different colors are needed so that all neighboring dots are different colors?

Images from Su and Danielle’s paper. Tower of Hanoi graphs with four pegs.

Su and Danielle showed that even as the number of disks and pegs grows—and the puzzle graphs get very large and complicated—the number of colors required does not increase quickly. In fact, you only ever need as many colors as you have pegs! Su and Danielle wrote up their results and published them as an article in Mathematics Magazine in 2010.

Today Danielle lives in North Dakota and is an analyst at Hartford Funds. She uses math every day to help people to grow and manage their money. Su teaches at Ausburg College in Minnesota where she carries out her belief “that everyone can learn mathematics.”

Do you have a question for Su or Danielle—about their Tower of Hanoi research, about math more generally, or about their careers? If you do, send them to us in the form below for an upcoming Q&A!

UPDATE: We’re no longer accepting questions for Su and Danielle. Their interview will be posted soon! Ask questions of other math people here.

Last up, here’s a gorgeous website called Mathigon, which someone shared with me recently. It shares a colorful and sweeping view of different fields of mathematics, and there are some interactive parts of the site as well. There are features about graph theory—the field that Su and Danielle worked in—as well as combinatorics and polyhedra. There’s lots to explore!