Welcome to this week’s Math Munch! And, if you’re a student or teacher, welcome to a new school year! 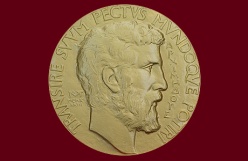 One of the most exciting events in the world of math happened this August– the awarding of the Fields Medal! This award honors young mathematicians who have already done awesome mathematical work and who show great promise for the future. It also only happens every four years, at the beginning of an important math conference called the International Congress of Mathematicians, so it’s a very special occasion when it does! 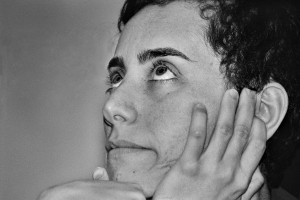 Maryam Mirzakhani, first woman ever to win a Fields Medal

This year’s award was even more special than usual, though. Not only were there four winners (more than the usual two or three), but one of the winners was a woman!

One thing you’ll immediately notice is that each Fields Medalist has non-math interests that inspire their mathematical work. Take Manjul, for instance. When he was a kid, his grandfather introduced him to Sanskrit poetry. He was fascinated by the patterns in the rhythms of the poems, and the number patterns that he found inspired him to study the mathematics of number patterns– number theory!

But, don’t just take my word for it– you can read all about Manjul and the others in these great articles! And did I mention that they come with videos about each mathematician?

Want to read more about this year’s Fields Medallists? Check out Alex Bellos’s article in The Guardian. Which brings me to…

… What’s your favorite number? Is it 7? If it is, then you’re in good company! Alex polled more than 30,000 people about their favorite number, and the most popular was 7. But why? What’s so special about 7? Here’s why Alex thinks 7 is such a favorite: 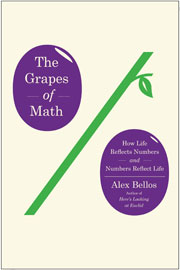 Why do you like your favorite number? People gave Alex all kinds of different reasons. One woman said about 3, her favorite number, “3 wishes. On the count of 3. 3 little pigs… great triumvirates!” Alex made these questions the topic of the first chapter of his new book, The Grapes of Math. (Get the reference?) In this book, Alex shares many curious ways that math appears in our world. Did you know that a weird pattern in numbers can be used to catch criminals? Or that the Game of Life, a simple computer program, shares surprisingly many characteristics with real life? These are only a few of the hundreds of topics Alex covers in his book. Whether you’re a math whiz or a newbie, you’ll learn something new on every page.

Alex currently writes about math for The Guardian in a blog called, “Alex’s Adventures in Numberland”— but he also loves and writes about soccer (or futbol, as it’s called in his native Brazil)! He even wrote a few articles for his blog about math and soccer.

Do you have any questions for Alex? (About math, soccer, or their intersection?) Write them here and you might find them featured in our interview with Alex!

Good writing about math is hard to find. If you’ve ever picked up a standard math textbook, you’ll know what I mean. But reading something fascinating, that grabs your interest from the first page and leads you through the most complex ideas like they’re as natural as anything you’ve observed, is a great way to learn. The Grapes of Math and “Alex’s Adventures in Numberland” do just that. Give them a go!

You might remember our post on Tilman Zitzmann’s project called Geometry Daily. If you haven’t seen it before, go check it out now! It will help you to appreciate Lawrie Cape’s work, which both celebrates and extends the Geometry Daily project. Lawrie’s project is called Tangent Spaces. He makes Tilman’s geometry sketches move!

Not only do Lawrie’s sketches move, they’re also interactive—you can click on them, and they’ll move in response. All kinds of great mathematical questions can come up when you set a diagram in motion. For instance, I’m wondering what moon patterns are possible to make by dragging my mouse around—and if any are impossible. What questions come up for you as you browse Tangent Spaces?

Next up, Dorry Segev and Sommer Gentry are a doctor and a mathematician. They collaborated on a new system to help sick people get kidney transplants. They are also dance partners and husband and wife. This video shares their amazing, mathematical, and very human story.

Dorry and Sommer’s work involves building graphs, kind of like the game that Paul posted about last week. Thinking about the two of them together has been fun for me. You can read more about the life-saving power of Kidney Paired Donation on optimizedmatch.com.

Last up this week, here’s some very fresh math—discovered in the last 24 hours! Joe O’Rourke is one of my favorite mathematicians. (previously) Joe recently asked whether a golyhedron exists. What’s a golyhedron? It’s the 3D version of a golygon. What’s a golygon? Glad you asked. It’s a grid polygon that has side lengths that grow one by one, from 1 up to some number. Here, a diagram will help:

The smallest golygon. It has sides of lengths 1 through 8.

A golyhedron is like this, but in 3D: a grid shape that has one face of each area from 1 up to some number. After tinkering around some with this new shape idea, Joe conjectured that no golyhedra exist. It’s kind of like coming up with the idea of a unicorn, but then deciding that there aren’t any real ones. But Joseph wasn’t sure, so he shared his golyhedron shape idea on the internet at MathOverflow. Adam P. Goucher read the post, and decided to build a golyhedron himself.

And he found one!

The first ever golyhedron, by Adam P. Goucher

Adam wrote all about the process of discovering his golyhedron in this blog post. I recommend it highly.

And the story and the math don’t stop there! New questions arise—is this the smallest golyhedron? Are there types of sequences of face sizes that can’t be constructed—for instance, what about a sequence of odd numbers? Curious and creative people, new discoveries, and new questions—that’s how math grows.

If this story was up your alley, you might enjoy checking out the story of holyhedra in this previous post.

Earlier this month, neuroscientists Stan Schein and James Gayed announced the discovery of a new class of polyhedra. We’ve often posted about Platonic solids here on Math Munch. The shapes that Stan and James found have the same symmetries as the icosahedron and dodecahedron, and they also have all equal edge lengths.

One of Stan and James’s shapes, made of equilateral pentagons and hexagons.

These new shapes are examples of fullerenes, a kind of shape named after the geometer, architect, and thinker Buckminster Fuller. In the 1980s, chemists discovered that molecules made of carbon can occur in polyhedral shapes, both in the lab and in nature. Stan and James’s new fullerenes are modifications of some existing shapes first described in 1937 by Michael Goldberg. The faces of Goldberg’s shapes were warped, not flat, and Stan and James showed that flattening can be achieved—thus turning Goldberg’s shapes into true polyhedra—while also having all equal edge lengths. There’s great coverage of Stan and James’s discovery in this article at Science News and a fascinating survey of the media’s coverage of the discovery by Adam Lore on his blog. Adam’s post includes an interview with Stan!

Next up—how much fun is it to find a fractal that’s new to you? That happened to me recently when I ran across the Fibonacci word fractal.

A portion of a Fibonacci word curve.

Fibonacci “words”—really just strings of 0’s and 1’s—are constructed kind of like the numbers in the Fibonacci sequence. Instead of adding numbers previous numbers to get new ones, we link up—or “concatenate”—previous words. The first few Fibonacci words are 1, 0, 01, 010, 01001, and 01001010. Do you see how new words are made out of the two previous ones?

Last but not least this week, check out this groovy applet!

Lucas’s applet showing the relationship between epicycles and Fourier series

A basic layout of Ptolemy’s model, including epicycles.

Sometime around the year 200 AD, the astronomer Ptolemy proposed a way to describe the motion of the sun, moon, and planets. Here’s a video about his ideas. Ptolemy relied on many years of observations, a new geometrical tool we call “trigonometry”, and a lot of ingenuity. He said that the sun, moon, and planets move around the earth in circles that moved around on other circles—not just cycles, but epicycles. Ptolemy’s model of the universe was incredibly accurate and was state-of-the-art for centuries.

In 1807, Joseph Fourier turned the mathematical world on its head. He showed that periodic functions—curves with a repeated pattern—can be built by adding together a very simple class of curves. Not only this, but he showed that curves created in this way could have breaks and gaps even though they are built out of continuous curves called “sine” and “cosine”. (Sine and cosine are a part of the same trigonometry that Ptolemy helped to found.) Fourier series soon became a powerful tool in mathematics and physics.

A Fourier series that converges to a discontinuous function.

And then in the early 21st century Lucas Vieira created an applet that combines and sets side-by-side the ideas of Ptolemy and Fourier. And it’s a toy, so you can play with it! What cool designs can you create? We’ve featured some of Lucas’s work in the past. Here is Lucas’s short post about his Fourier toy, including some details about how to use it.