Four million grains of sand dropped onto an infinite grid. The colors represent how many grains are at each vertex. From this gallery.

We got our first snowfall of the year this past week, but my most recent mathematical find makes me think of summertime instead. The picture to the right is of a sandpile—or, more formally, an Abelian sandpile model.

If you pour a bucket of sand into a pile a little at a time, it’ll build up for a while. But if it gets too tall, an avalanche will happen and some of the sand will tumble away from the peak. You can check out an applet that models this kind of sand action here.

A mathematical sandpile formalizes this idea. First, take any graph—a small one, a medium sided one, or an infinite grid. Grains of sand will go at each vertex, but we’ll set a maximum amount that each one can contain—the number of edges that connect to the vertex. (Notice that this is four for every vertex of an infinite square grid). If too many grains end up on a given vertex, then one grain avalanches down each edge to a neighboring vertex. This might be the end of the story, but it’s possible that a chain reaction will occur—that the extra grain at a neighboring vertex might cause it to spill over, and so on. For many more technical details, you might check out this article from the AMS Notices.

This video walks through the steps of a sandpile slowly, and it shows with numbers how many grains are in each spot.

A sandpile I made with Sergei’s applet

You can make some really cool images—both still and animated—by tinkering around with sandpiles. Sergei Maslov, who works at Brookhaven National Laboratory in New York, has a great applet on his website where you can make sandpiles of your own.

David Perkinson, a professor at Reed College, maintains a whole website about sandpiles. It contains a gallery of sandpile images and a more advanced sandpile applet.

I have a feeling that you might also enjoy playing the sandpile-inspired game Hexplode!

A great place to find out more amazing and fun facts like this one is at The Prime Pages. It has a list of the largest known prime numbers, as well as information about the continuing search for bigger ones—and how you can help out! It also has a short list of open questions about prime numbers, including Goldbach’s conjecture.

Be sure to peek at the “Prime Curios” page. It contains intriguing facts about prime numbers both large and small. For instance, did you know that 773 is both the only three-digit iccanobiF prime and the largest three-digit unholey prime? I sure didn’t.

Last but not least, I ran across this article about how a software company has come up with a new solution for mixing colors on a computer screen by using six dimensions rather than the usual three.

Dimensions of colors, you ask?

The arithmetic of colors!

Well, there are actually several ways that computers store colors. Each of them encodes colors using three numbers. For instance, one method builds colors by giving one number each to the primary colors yellow, red, and blue. Another systems assigns a number to each of hue, saturation, and brightness. More on these systems here. In any of these systems, you can picture a given color as sitting within a three-dimensional color cube, based on its three numbers. 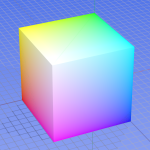 A color cube, based on the RGB (red, green, blue) system.

If you numerically average two colors in these systems, you don’t actually end up with the color that you’d get by mixing paint of those two colors. Now, both scientists and artists think about combining colors in two ways—combining colored lights and combining colored pigments, or paints. These are called additive and subtractive color models—more on that here. The breakthrough that the folks at the software company FiftyThree made was to assign six numbers to each color—that is, to use both additive and subtractive ideas at the same time. The six numbers assigned to a given number can be thought of as plotting a point in a six-dimensional space—or inside of a hyper-hyper-hypercube.

I think it’s amazing that using math in this creative way helps to solve a nagging artistic problem. To get a feel for why mixing colors using the usual three-coordinate system is such a problem, you might try your hand at this color matching game. For even more info about the math of color, there’s some interesting stuff on this webpage.